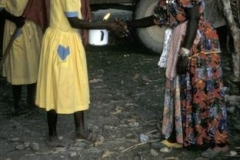 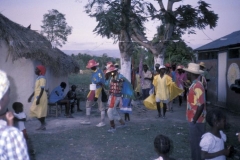 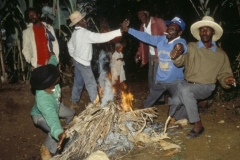 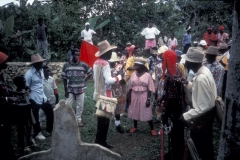 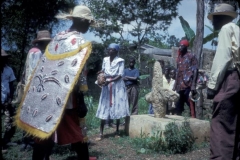 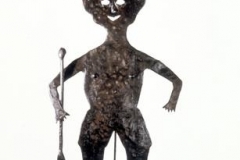 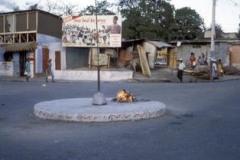 Rara band arrives a large lakou in the Artibonite. They salute the spirits who live at the gates with large circling dances called vire (turn). (This means that this Rara is also part of a religious society.) Later that night, the patriarch of the lakou will come out to receive them. This is all part of the politics of patronage, both of the human and spirit worlds.

The Rara has arrived in the cemetery and is saluting the cross of Bawon Simitye. He lights a fire lit below the cross, and leans brooms against it, for future use.

After lighting a fire on top of the veve, the priest activates the veve even more with salt and rum, and throws salt to the four directions.

Veve drawing before the Rara. The priest traces the veve, or sacred drawing, for Simbi.

Rum flares up the fire for Bawon, to activate this energy and heat it up.