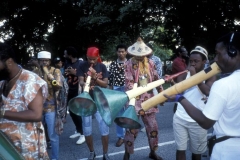 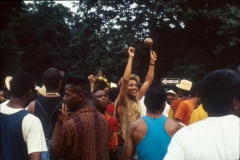 Rara musicians play in Prospect Park, Brooklyn, in the early 1990s. Check out the great bell playing later in the clip.

The Brooklyn Rara gets going and walks down the Park roadway. You can see the waves of musicians—drummers, bamboo players, and bell players. You sound great, guys!

The guys in the bell section jam out!

Prospect Park Rara, in the early 1990s. See some nice drumming close up.